The following guidelines are produced by the Internal Democracy group. They where experimented at each of the group's meeting and used in labs. The group was created as a consequence of complaints that meetings often didn't go well. Things didn't get done, meetings where tiresome, conflicts rose and didn't get resolved... These guidelines where built from the ground up by everyone who joined and helped.

Structure of the meeting 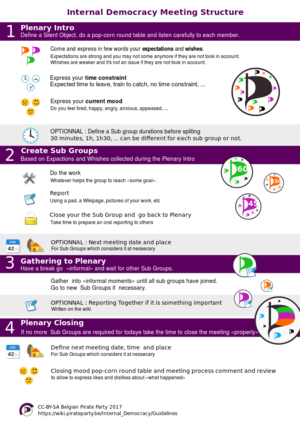 Visual for the meeting guidelines

At the start of a meeting there's a short popcorn table where:

After this the closing time is defined. Usually the same time to leave is for most people the same within the range of an hour. If most are between 17h and 18h then 17h is a good closing time. This usually goes very fast.

Here people have the possibility to introduce/explain further what they wish to accomplish. This can even lead to splitting up in even smaller subgroups.

Do the discussion/work to be done.

Where the group is big (plenary and closing) the whole thing is pretty well defined. The most important this here is that there can't be discussions here unless otherwise noted in the guidelines. This makes a moderator unnecessary. If people start discussing it's usually enough to just point that out. The subgroups is where you have more freedom. Here the groups should be small enough that a moderator isn't needed either.

Sometimes people need time to process things they heard or want to say. Some people have this more than others. Something we experimented with was the idea of a silent object.

Define a silent object (an empty bottle, a napkin, a saltshaker, ...) anything accessible by every members of the assembly.

It can be taken by anyone who needs all the group to remain silent until the silent object is released after a few seconds (to one or two minutes maximum).

The object become available again and the discussions can continue.

If more silent seems to be necessary, maybe it is the moment to have a break.

Reporting is an important point which has to be done by the sub groups (because the have to report to the plenary) and by the plenary (intro & closing).

Purpose
Inform about the ideas that came up or decisions that have been made within the subgroup
Make participation of people who weren't present possible.
Provides others with the necessary means to reach consensus for a decision and/or action.

Levels
Personal
For the group (the active members of a project).
For everyone (the rest of the world).

Content
People don't always like to have their name online, especially not on political things. But a good report has the Five Ws (what, who where, when, why +how). People who feel uncomfortable with putting their name online can always use a tagname/nickname.
Can be related to «what is the result of the meeting».

Media
Oral, we can count on our listening, collective memory, and group dynamics.
Written, if every members is unavailable, the written text is available.
We use the wiki because, disregarding the fact that it seems to be complicated for the untrained users, it is a platform on which we count because; it's FOSS, it's public, it's transparent, it does not forget (create, edit, delete, move).

It's always important to have a good atmosphere when having a meeting. People can contribute a lot to this, but there are other things as well